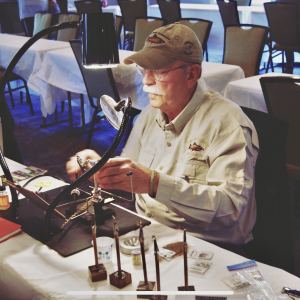 In this post, we shine the spotlight on East Tennessee Fly Tyer and current Clinch River Chapter of Trout Unlimited president Bob Stephan. Bob is a long-time resident of Norris, TN, and regularly demonstrates his skills through live-fly trying sessions that can be found on the Clinch River Chapter of Trout Unlimited Facebook page. In addition, Bob volunteers his time to support Casting for Recovery and Project Healing Waters Fly Fishing, teaching fly tying and casting, and regularly volunteers for the annual Fly Tyers Weekend held in Townsend, TN.

Being a self-taught East Tennessee Fly Tyer who has tied flies for over 20 years, Bob only ties flies for fishing; none of his flies end up in shadow boxes. He started tying flies in late 1997 a fly tying kit from Cables after he became bored recovering at home from medical issues. Shortly after receiving the fly tying kit, he realized he needed more materials. He asked a friend to drive him to Little River Outfitters in Townsend, TN, to purchase his needed material. With the help of some good instructional books and many “do-overs,” he got a handle on it and was hooked.

Bob’s favorite fly is the March Brown Dry Fly. He loves dry fly fishing in the spring, and the March Brown, done in the classic Catskill style, is a beautiful and productive fly. He recalled that the best day on a river using a March Brown was in Yellowstone National Park; on the Lamar River, a Cutthroat Trout took his March Brown so many times that there was not enough dressing on the hook shank to keep it afloat. Like most flies, the March Brown can be tied in several different material types and colors. Some tiers prefer a tan dubbing, while others like a reddish or ginger color dubbing for the body. Wings are no different, I prefer Mallard Flank-dyed Wood Duck, but I have also seen Crow Hen feathers used. I have had excellent success with this dressing in the East in our Smoky Mountains and the rivers of Yellowstone. 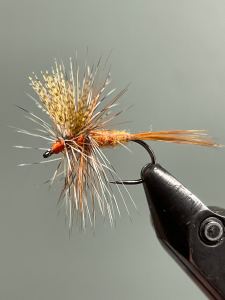 Like most flies, the March Brown can be tied in several different material types and colors. Some tiers prefer a tan dubbing while others like a reddish or ginger color dubbing for the body. Wings are no different, I prefer Mallard Flank dyed in Wood Duck, but I have also seen Crow Hen feathers used. I have had very good success with this dressing in the East in our Smoky Mountains and in the rivers of Yellowstone. 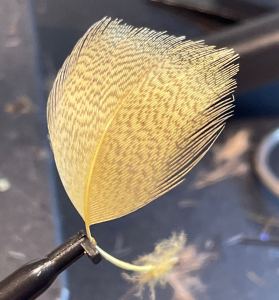 Step 1: I like to prep my materials before I start tying any fly. The Mallard flank can be an issue as not all feathers have even tips. Select a feather with as many even tips as you can and remove barbules and fuzz from the lower section of the feather. 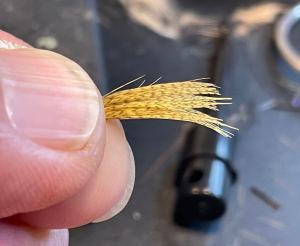 Step 2: Pull the barbules forward and together to form the beginning of the wing. 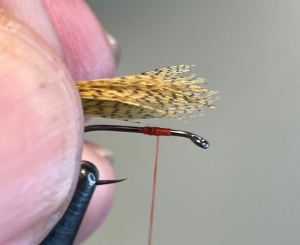 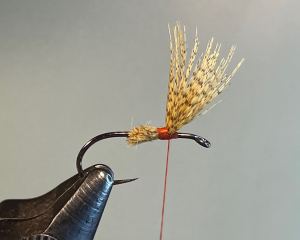 Step 4: The wing is tied upright and divided. You can take one or two figure-eight wraps to divide the wing. Take one or two wraps around the base of the wing to post up the wing. 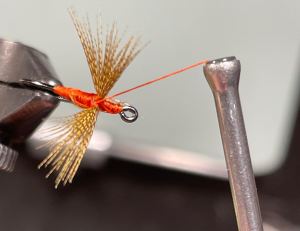 Step 5: Next, divide the Mallard flank into equal amounts. Take your thread and make two or three figure-eight wraps between the Mallard flank to create the two wings. After tying in the wing make an angled cut with your scissors, this will help make a tapered body. 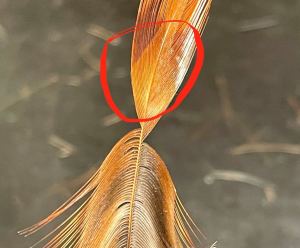 Step 6. The tail is made from Ginger Spade Hackle. Spade hackles are very stiff and make great tailing material. First, remove the fluffy material and remove the area that contains “webbing” (See the circled area on the picture to the left). 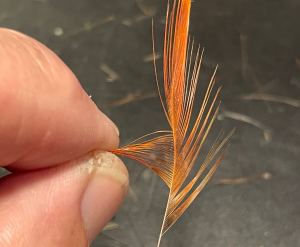 Step 7. Pull the needed number of barbules outward from the quill to 90 degrees, this will align the tips of the barbules. You can either strip off the quill or cut using your scissors. Eight to ten barbules are sufficient for the tail. 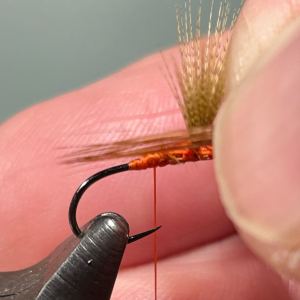 Step 8. The tail is measured to the length of the hook and tied in just forward of the bend of the hook. When tying in the tail, don’t take thread wraps back to the bend. Leaving this space will improve the taper of your finished fly. 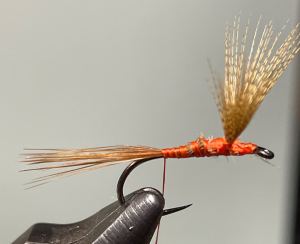 Step 9. Move the thread back to the bend to apply the dubbing and form the body. 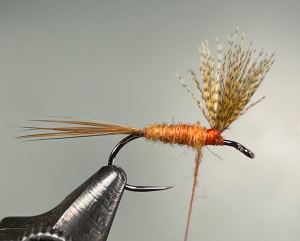 Step 10. When applying dubbing to your thread, take care not to use too much. Get half of what you think you will need and then take half of that off, then you will have about what you really need. It is easier to add dubbing than it is to sometimes remove it. Leave some empty next to the hook shank. I don’t push the dubbing up the thread to the hook shank as this will sometimes loosen your dubbing noodle. 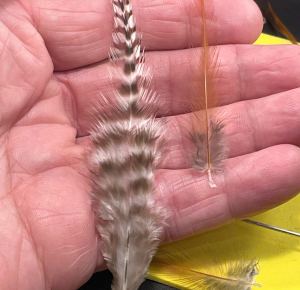 Step 11. Select two hackles, one grizzly, and one brown. You will want the hackle tips to be slightly below the wing. It is sometimes hard to judge the hackle size and you can’t always go by the size of the hook. 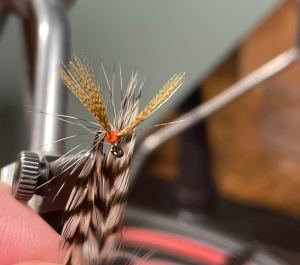 Step 12. Take the hackle that you think will work, and wrap the hackle around the hook taking note of where the tips of the hackle are in relation to the wing. 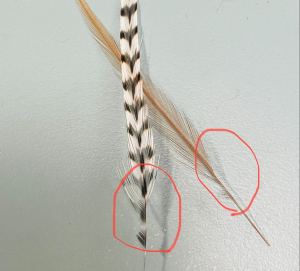 Step 13. I prep my hackles by cutting a small comb on the tier’s side to give the thread something to grab and lock onto. I strip away barbules from the opposite side to give me a clean leading edge (See the circled area on the picture to the left). 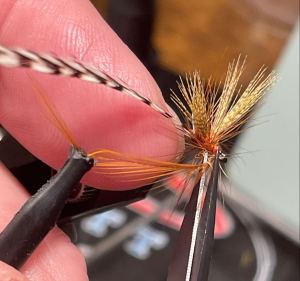 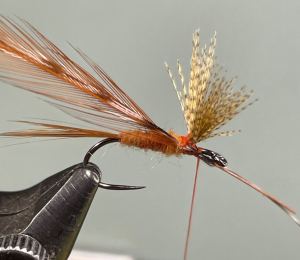 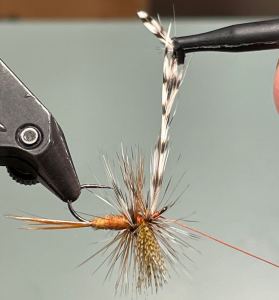 Step 15. Wrap your hackle away from you or clockwise around the hook shank. Three or four turns behind the wing and then two to three turns in front of the wing. Clip excess and repeat with the second. 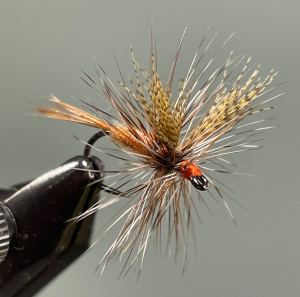 You can overdress a dry fly (by using too much hackle), but you don’t want to skimp with the hackle on this fly. You want this fly to ride high on the water and be able to float through the riffles. The March Brown is a great fly to set up a “dry-dropper” rig, tying a nymph from the bend or the eye of the dry fly.

Here is an instructional video of Bob tying the March Brown for PHWFF. https://www.facebook.com/ProjectHealingWatersKnoxville/videos/361314801649528/

Would you like to contribute to this blog? Guild members may submit articles about fly tying history, tying techniques, favorite fly patterns, and recipes. Other topics include profile spotlights on tyers, personal stories, and experiences related to fly tying. To submit an article please follow the instructions in these Post Guidelines.

• Articles need to be between 300 to 1500 words, single-spaced, 12pt, Times New Roman or other readable fonts such as Calibri or Arial.
• The article can be sent in the body of the email or in a Word or Google document. No PDF. Ensure to give proper credit to reference sources to avoid plagiarism.
• Images need to be clear, relevant to the topic, in JEPG/JPG format, no larger than 1MB. Consider that cropping and sizing may be necessary for fit. Provide image placement and caption information, if needed.
• Provide an article title that is “Eye-catching” and highlights the articles main point or topic.
• Submit articles to tyersguildblog@gmail.com. In the subject line write “Request to have an article published to the Fly Tying Blog”.
• Begin your email message with a statement to the Editor that you, the author, gives the Fly Tyers Guild permission to publish and retain the content, images, and photos on the Fly Tying Blog- Fly Tyers Guild site.
• Be sure to state how you want to be recognized as the author. You can use first name, full name, a pen name, or it can be anonymous.
• Note that this is an open site and everything is viewable to the public.

Thank you in advance for sharing your knowledge and experiences and for advancing the craft of fly tying. Feel free to contact me at FlyTyingTrout65@outlook.com if you have any questions.