Competent angler and naturalist Oliver Kite describes the Sawyer Nymph as one of the most effective nymph fly patterns ever devised (Sutcliffe, T.). The Sawyer Nymph, when finished has a pronounced thorax suggesting a bulging wing case and body that tapers neatly to the tail, with tail fibers spread. The upper part of the thorax is much darker than the rest of the body. This is caused by the lapping of the pheasant tail fibers back and forth to form the wing case. This dark tone gives the nymph a more natural appearance. When wet, this pattern has a translucent effect from the copper wire showing through the pheasant tail fibers. Sawyer believed that the best artificial imitations used the simplest of patterns with few materials (Sawyer, F.).

Frank Sawyer was employed by The Fishing Association in Wiltshire, England for forty-one years as the Riverkeeper along the upper Avon. He was a very observant naturalist and fly fisherman. It was here that Sawyer committed much of his time observing mayfly nymphs, In his book “Nymphs and the Trout” he talks about his study of aquatic insects and how he learned to create successful artificial imitations. The “Sawyer Nymph” or “Pheasant Tail Nymph (PTN)” is a popular nymph pattern with many variations and sizes. The content of this article will mostly come from Sawyers book “Nymphs and the Trout” with some additional notes from my own experiences when I have tied this fly pattern. 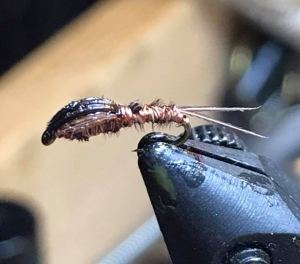 Sawyer describes the tail of a nymph varies so one should select lengths of pheasant tail fiber suitable to the size of the hook used. This is so the dark part is of suitable length for making two folds over the thorax to form a wing case. Sawyer makes a note in his book about legs tied we see on modern variations of the PTN used today. When rising to the surface, the legs on a nymph are pulled into the body and concealed so they are omitted in the Sawyer Nymph (Sawyer, F.). The image to the right is a Sawyer Nymph that I tied. Looking behind the wing case you will see that I made a third lap over the thorax with my pheasant tail fibers, then tied off the wire behind the wing case. I found this to be easier than trying to tie the wire off at the hook eye. Something to keep in mind when choosing fiber length.

The materials Sawyer lists in his book “Nymphs and the Trout” begin with a hook in sizes No. 00, No. 0, and No. 1 which is equal to English sizes 17, 16, and 15 respectively. The English use odd hook sizes so a size 17 is between what we know to be 18 and 16 and size 15 is between 14 and 16 (Hopewell, J.). Sutcliffe states in his blog post that he uses a standard nymph hook in sizes 14, 16, and 18. I believe this is common for most of us when tying a PTN. The wire used for the body is fine, red-colored copper that Sawyer states is “little thicker than a human hair”. He states using wire from “the windings in small transformers, dynamos, or electric motors”. For the tail, body, and wing case consist of four “ of a browny-red cock pheasant tail feather”.

On Youtube, I found this 1950’s video demonstration with Frank Sawyer tying his Sawyer Nymph. There is no audio and it is not in color, but still found it informative Frank Sawyer – Sawyer Nymph Demonstration 1950. There are other instructional videos on Youtube that better explain and demonstrate the tying of this pattern. I added this video only for historical reference, but it does provide some good, up close visuals of the tying process. I found this instructional video Martyn White Flicking Feathers to be a good resource for learning to tie the Sawyer Nymph

I have found the PTN to be a very good and must-have artificial in my fly box. This is especially true when fishing the Norris Dam tailwaters on the Clinch River. It is a fly pattern often taught in our beginner fly tying classes for Project Healing Waters Fly Fishing and Clinch River Chapter Trout Unlimited. The Pheasant Tail Nymph (PTN) pattern in existence today has many variations. The pattern I first learned to tie has a gold or copper bead head, a pheasant tail body, and copper wire as ribbing. In some patterns, I have added legs and used peacock herl for the thorax.

As the reader, I hope you found this article interesting and informative. I kept the articles scope limited to just a brief overview of the Sawyer Nymph, its creator Frank Sawyer, and some additional reflections and experiences of my own. There are many more online resources about Frank Sawyer if you wish to learn more. I enjoy researching the historical background to fly patterns and recreating them. It has become just as much a hobby as Fly Fishing and Fly Tying. If you are a Fly Tying Guild member, lof in and feel free to make comments. If your not a Fly Tying Guild member, consider becoming one and email your questions to tyersguildblog@gmail.com.

Would you like to contribute to this blog? Guild members may submit articles about fly tying history, tying techniques, favorite fly patterns, and recipes. Other topics include profile spotlights on tyers, personal stories, and experiences related to fly tying. To submit an article please follow the instructions in these Post Guidelines.

• Articles need to be between 300 to 1500 words, single-spaced, 12pt, Times New Roman or other readable fonts such as Calibri or Arial.
• The article can be sent in the body of the email or in a Word or Google document. No PDF. Ensure to give proper credit to reference sources to avoid plagiarism.
• Images need to be clear, relevant to the topic, in JEPG/JPG format, no larger than 1MB. Consider that cropping and sizing may be necessary for fit. Provide image placement and caption information, if needed.
• Provide an article title that is “Eye-catching” and highlights the articles main point or topic.
• Submit articles to tyersguildblog@gmail.com. In the subject line write “Request to have an article published to the Fly Tying Blog”.
• Begin your email message with a statement to the Editor that you, the author, gives the Fly Tyers Guild permission to publish and retain the content, images, and photos on the Fly Tying Blog- Fly Tyers Guild site.
• Be sure to state how you want to be recognized as the author. You can use first name, full name, a pen name, or it can be anonymous.
• Note that this is an open site and everything is viewable to the public.

Thank you in advance for sharing your knowledge and experiences and for advancing the craft of fly tying. Feel free to contact me at FlyTyingTrout65@outlook.com if you have any questions.